Who is the jackass 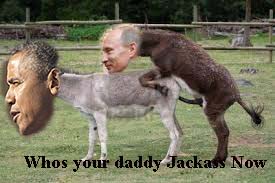 The press corps appeared stunned by the uncharacteristic outburst from Mr. Obama, who then unleashed a ten-minute tirade at the stone-faced Russian President.

“Look, I’m not just talking about Snowden and Syria,” Mr. Obama said. “What about Pussy Riot? What about your anti-gay laws? Total jackass moves, my friend.”

“If you think I’m the only one who feels this way, you’re kidding yourself,” Mr. Obama said, jabbing his finger in the direction of the Russian President’s face. “Ask Angela Merkel. Ask David Cameron. Ask the Turkish guy. Every last one of them thinks you’re a dick.”