Jerry Sandusky guilty of 45 of 48 counts of child sexual abuse was going to be appointed kiddy czar by Obama . But he recently got a job a a local prison and found true love. He now has a relationship with another inmate named Bubba so he turned down the CZAR offer, sighting he has a new new nickname Bubba his lover gave it to him (Bend Over Billy). Neil Goldschmidt should be there so they can say the gangs all here. But Oregon decided his money was more valuable than Justice. Too bad Neil didn’t live in Pennsylvania. 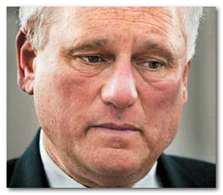